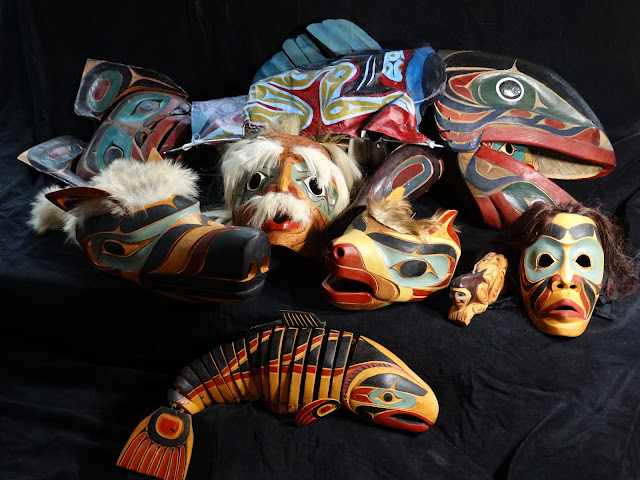 Founded in 2008 by George Melas Taylor and Craig Jacobrown that is managed and run by a non-profit organization comprised of a majority of Northwest Native First Nations artists and educators. The Collective was formed to integrate strong traditional NW Native story, song, dance, sculptural and two dimensional forms with the aesthetic and technical production values of modern mask and puppet theater.

George is the director and lead singer of the ‘Lelala Dance Society', a family of traditional singers and dancers of the Kwakwaka’wakw (Kwakiutl) Nation. 'Lelala' means 'traveling from here to there' in the Kwakwala language and reflects the fact that George and his dancers have traveled to over a dozen countries as cultural arts ambassadors sharing their deep connection to the NW ecology. George has been in charge of assembling a talented group of NW Native culture keepers in Washington State  and British Columbia to collaborate closely with talented NW Native artists to  produce several performance tours and films.

Craig was raised in Washington State where he trained and worked as a performer and puppet maker in European, Turkish and Balinese mask and puppetry styles. He completed an apprenticeship with internationally known NW Coast Native caver Duane Pasco, and another with dancer and cultural expert Chief Henry Seaweed of the Kwakwaka’wakw Nation. Craig and his wife, Zann, own and operate an arts business called The Maskery, producing masks for sale and mask theater performances across the US and in many parts of the world. Craig holds a Masters in Teaching for the Native American Learner and together with Zann, acted as the staff to produce the 'Ancient Art of Conflict Resolution' curriculum materials.

Joe Ives is an internationally renown artist and the lead designer in a well respected Port Gamble S'Klallam family of artists. He has also designed many masks that illustrate the stories he likes to tell. Joe has heard many stories from his grandmother and other first Nations elders. Joe joined the Hamumu Arts Collective to promote the rich stories, values, arts and culture of his Northwest Native S'Klallam community.
Joe designed and invited James Smith, a Suquamish tribal member and Craig Jacobrown to create this array of Salmon Story masks and puppets to be used in the films 'Natural Gifts' and 'Gift of Salmon'. The 'Ives' style is internationally recognized and particularly well known throughout Washington State. Joe Ives carvings are on display throughout State Indian reservations, tribal casinos and private collections.